The international hybrid conference “Gender equality in CEE countries: Policies and practices 2020 / Institutional change through implementation of GEPs at the RPOs and RFOs in the CEE countries” was hold on 11 and 12 November 2020 by Lithuanian Social Research Centre (LSRC) and Vilnius University (VU), both members of the GEinCEE CoP. The ACT project and the GEinCEE CoP were partners of the conference. The conference proved to be a success with 145 registered participants from 21 countries and up to 50 institutions, interesting sessions and great input from attendees. 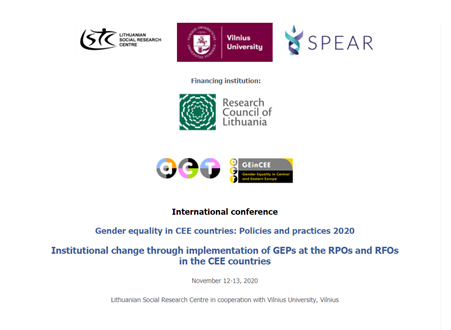 The conference addressed the developments in gender equality initiatives in Central and Eastern European universities and research organisation in the context of EU efforts to promote gender equality, including its ambition to introduce Gender Equality Plans as eligibility criterion for Horizon Europe funding. The two-day gathering brought together both researchers and practitioners studying gender inequalities and designing and implementing GEPs in CEE universities and research organisations under the framework of the “Science with and for society” projects in the Horizon 2020 programme. The participants had a great opportunity to exchange knowledge and share experience in developing activities striving to ensure excellence in science and innovation through the strengthening of gender equality. The conference was also an excellent  forum of networking and opened up new avenues for future collaboration.

The GEinCEE CoP was well represented at the conference and debates. The opening plenary talk entitled ‘How do research organisations in Central and Eastern Europe commit to gender equality? Findings from the ACT project” was given by Ewa Krzaklewska, Paulina Sekuła and Marta Warat from Jagiellonian University in Krakow. Based on the results from the ACT Community Mapping and a diagnosis of gender equality status quo in selected RFOs they discussed the variety of implemented gender equality measures as well as internal and external drivers to institutional change in CEE research organisations. 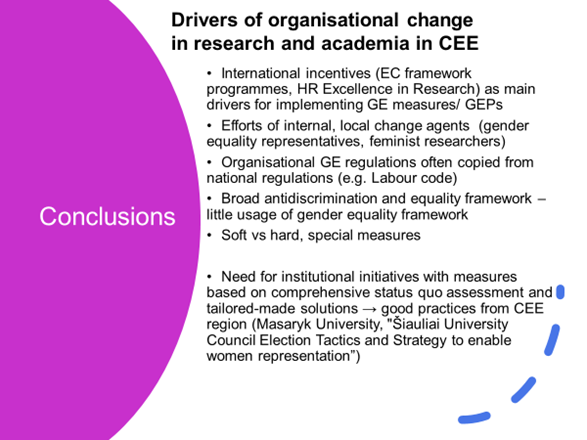 Beyond the plenary talk, the CoP members were active in debates and panels. Natasza Kosakowska-Berezecka and Magdalena Żadkowska from University of Gdansk gave an insight into the results of gender equality interventions at their university carried out under the framework of the STARBIOS2 project (“STARBIOS2 Project: Gender as a trigger for sustainability and structural change at University of Gdansk”). Lidia Zakowska and Zofia Bryniarska from Cracow University of Technology presented developments in implementing GEPs at their organisation (“Experiences from building GEP for Politechnika Krakowska, as part of H2020 project GEECCO”). Rūta Ruolytė-Verschoore from Vilnius University discussed the role of SPEAR project in developing gender equality measures (“SPEAR Project in Vilnius university: on the way to gender equality”). The perspective was widened by Aurelija Aurelija Novelskaitė co-discussing the role of assessing the status quo as a part of the implementing process (“Gender Equality Plans at Lithuanian Universities. Identifying and Addressing Cultural and Structural Barriers”). Katarzyna Jurzak from Jagiellonian University in Krakow assessed the role of a few European projects conducted at the university in strengthening its gender equality bodies and policies (“Impact of projects on gender equality and antidiscrimination funded by the European Union – practical perspective”). Veronika Mešková from the University of Žilina discussed the steps of institutional change at her university taken under the framework of the H2020 Change project. The conference closing plenary talk was given by Virginija Šidlauskienė from Šiauliai University who presented the analysis of the achievements of gender equality projects funded under SwafS in Horizon 2020 (“What Structural Changes are Caused by Gender Equality Plans in Higher Education and Research Organizations?

We also had a chance to popularise our activities within the CoP and in the member organisations at an Informal Lounge with the GEinCEE Community of Practice. One of the activities we plan early next year is to update the online Map of Gender Equality bodies, legislation and measures in CEE universities and research centres. This online map gathers information about the status quo of gender equality institutionalisation in the region. If you like to include your research organisation or university on the map and if you are ready to help us with collecting information on gender equality bodies, legislation and measures existing at your organisation, please write to us at: actongender@uj.edu.pl.

It is as well worth mentioning that an initiative to support ongoing women’s protests in Poland was launched at the conference and 63 participants, including academic management, experts, researchers, teachers and students, signed the statement of support for gender equality and freedom of expression in Poland.

Many thanks for the colleagues from VU and LSRC for the organisation of this unique event and supporting the exchange of knowledge in the region!