Since our Community last face-to-face meeting in November 2019 in Vilnius the the Community of Practice for Gender Equality in Central and Eastern Europe ‘On the way to GEP’ (GEinCEE CoP) has further developed its’ activities. Intense multi-lateral and bi-lateral communication and cooperation took place in the last months.

Most of all, we were preparing within our instituions to launching the Gender Equality Auditing and Monitoring (GEAM) survey. The Jagiellonian University team – with the involvement of other partners from Poland – worked on the Polish translation of the questionnaire and adapted questions and answer options to the context of academic institutions in Poland. The Lithuanian colleagues worked on the correction of the Lithuanian translation and its adaptation. The member organisations were getting ready to the survey by making internal arrangements concerning reaching the target population, privacy settings and coordination of the survey. Due to coronovirus pandemic we decided however to postpone the launching of the survey.

In the meanwhile, we are working on the analysis of institutional situation in the region. Last year, the members of the GEinCEE CoP did a preliminary status quo assessment by collecting information on existing gender equality policies and measures in their own organizations. Basing on the collected data, we have been developing an online map of gender equality bodies and solutions in research organisations and higher education institutions of Central and Eastern Europe – it will be an easy accessible source of information about our regional situation in this respect. Additionally, several GEinCEE CoP members gave accounts of the developments concerning gender equality in their organisations in posts published in the the GEinCEE blog (https://geincee.act-on-gender.eu/activities) – also explaining their motivation for joining our community. We also gathered more detailed data on the status quo of institutionalisation of gender equality in the biggest Polish universities and presented the results of the analysis in a series of blog posts.

As March is an important month for equality - as a community we effectively took part in the #COMMIT2GENDERRING Twitter campaign for #8M2020, coordinated by the ACT project and joined by other 12 international projects funded by Horizon2020.  Ten GEinCEE CoP’s member organisations contributed to the action by publishing templates on their commitments towards gender equality – fingers crossed for our committments. 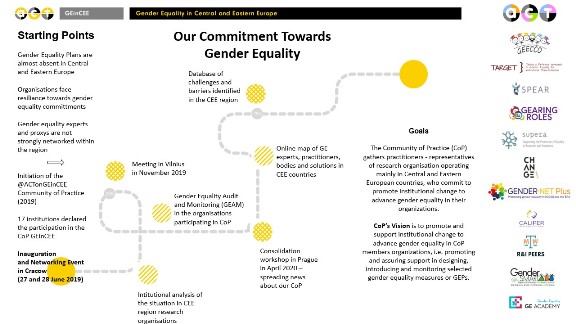 We also planned a few common initiatives. In cooperation with the colleagues from the Academy of Arts, Architecture and Design in Prague and the Czech Academy of Science we were getting ready for the GEinCEE CoP Consolidation workshop, which was scheduled to take place in April in Prague and was aiming at consolidating our Community and promoting our activities in the region. However, the spread of coronavirus cooked our goose and we transform the workshop into a series of online meetings – happening in April and May. Hopefully we will be able to present ourselves as a community during the the 2nd BASEES Regional Conference ‘Globalizing Eastern Europe – New Perspectives on Transregional Entanglements’ scheduled for September 2020 in Leipzig. Our panel proposal ‘EU-nization of gender equality policies in Central and Eastern European Research and Higher Education’ has been accepted by the organisers (https://www.leibniz-eega.de/events/conferences/basees/).

Last but not least we carried out the process of signing the amendment to the Memorandum of Understanding, which allows us to accept new members to our Community of Practice. So if you would like to join the GEinCEE CoP or just learn more about its activities, do not hesitate to contact us at actongender@uj.edu.pl